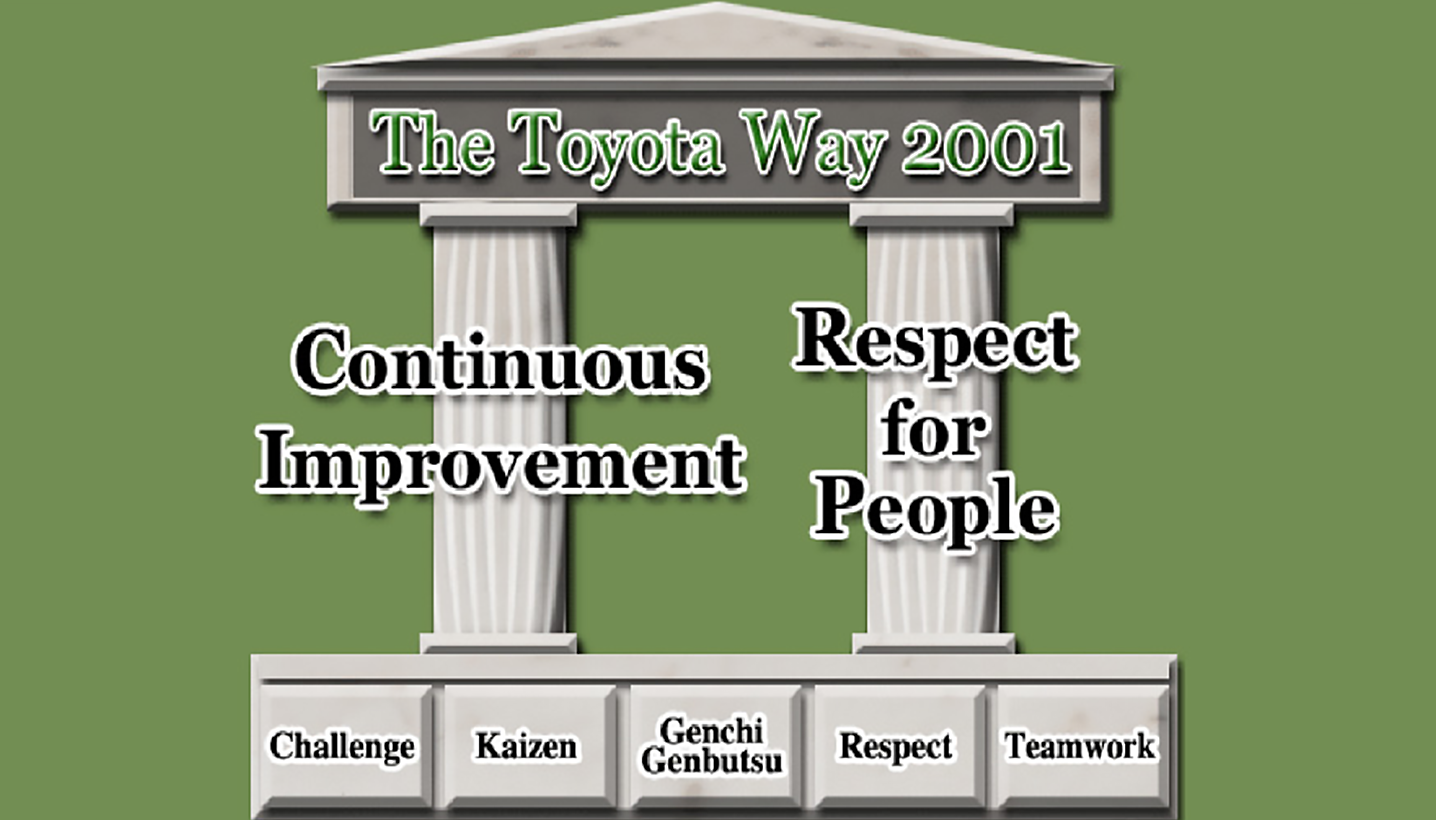 'The Toyota Way' was first published in 2004. Based on two decades of studying Toyota, it applies what I learned as a trainer and consultant in many different types of companies and industry sectors. The book was organised around fourteen principles I derived: the central plank being the '4P Model': Philosophy, Processes, People, and Problem Solving. It quickly became a best-seller and companies would call it their 'bible for management principles'.

My experience of training thousands of people led me to a sober conclusion. I began to realise that few organisations have the long-term perspective and dedication to build a culture necessary to even begin to build a work culture around the full Toyota Way. In fact, few companies get beyond improving selected processes using lean tools and developing a small number of experts often called 'black belts'.

The usual situation has been great enthusiasm for new lean tools and quick results, followed by concern that lean was not naturally spreading and was often decaying in islands of excellence, which causes disillusionment with the lean programme. Then it's on to the next fad. Curiously, in many organisations lean would later reappear in a slightly different form, often when new executives were hired from outside. Lean may therefore go through various lives over five to 15 years emerging, blossoming, decaying and re-emerging in a slightly different form, and so on.

The small percentage of cases where lean actually catches hold as a sustainable cultural change are all differentiated by one factor: Leadership. In some organisations a senior executive is passionate about lean and is determined to make it a way of life for the organisation. If the senior executive is below the CEO level, say a Chief Operating Officer, she will demonstrate such outstanding results that the rest of the organisation will have to take notice. Then lean may spread to other parts of the company in a positive way and begin to approach a lean enterprise.

Leaders who take the reins and turn lean from a vague concept to a daily reality have a few characteristics in common. They all had:

Take Jim Collins for example. Writing on Level 5 Leaders, in his books 'Good to Great' or 'Built to Last' you already have a picture of these types of leaders. This is not something limited to followers of lean and Toyota.

Developing Lean Leaders at all Levels

I spent a great deal of time studying the leadership literature and working to shift the focus on our training and consulting to focus on identifying and developing these types of leaders. That led to working with Gary Convis, the former head of North American Manufacturing and Managing Officer for Toyota, on a book that became 'The Toyota Way to Lean Leadership'. This was then followed by a more practically-oriented book called 'Developing Lean Leaders at all Levels'. Both books were based on a four-stage leadership model that emerged through analysing Gary's growth as a leader while working for Toyota.

The starting point were the core values of 'The Toyota Way', based on Toyota's internal model. They represent the 'Toyota Way' as a house with two pillars of continuous improvement and respect for people: 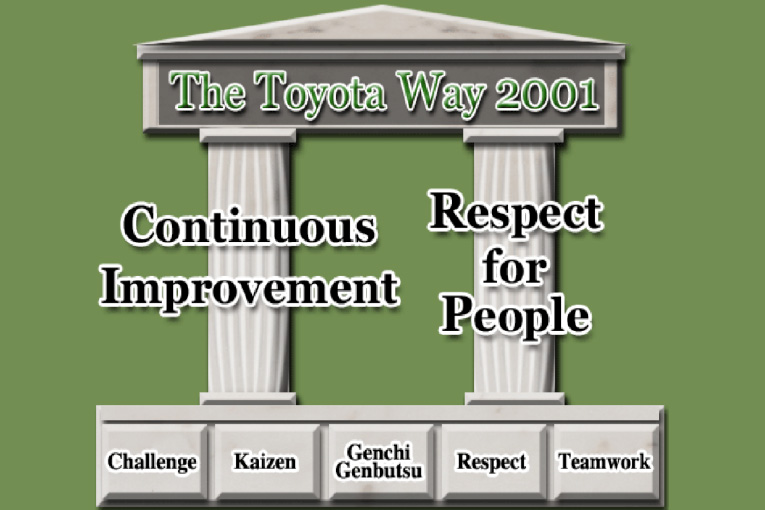 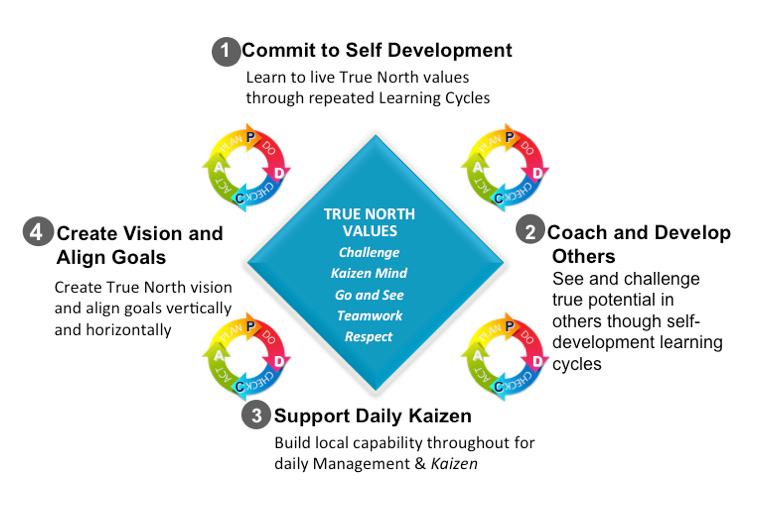 Gary Convis and his leadership journey at Toyota

In Gary Convis' case, he was hired by Toyota in 1984 as it embarked on its first venture in manufacturing in the United States. It was a joint venture between Toyota and General Motors called NUMMI (New United Motors Manufacturing, Inc) and was located in California where GM had closed down a plant. The factory was shut down because costs were high, quality was low and the workforce was very militant.

Toyota took back over 80% of that work force, came to a contractual agreement with the United Auto Workers union, and within its first year of operation NUMMI turned out the highest quality cars at the highest level of productivity of any plant in North America. Gary was a part of that.

Developing Gary as a leader was a major focus of Toyota and he had to start with self development, as the drive to change had to come from Gary. He was selected because Toyota leaders saw a desire in Gary to learn and improve himself. As he was developing he was learning to coach and develop others.

When NUMMI reached a certain level of maturity after several years, work groups throughout the operation were able to operate relatively self-sufficiently. Gary's role entailed supporting daily kaizen, (a systematic improvement method coined by Toyota) rather than trying to lead it himself. The final step was aligning targets for improvement from top to bottom and across departments using a Japanese management method called Hoshin Kanri.

This was possible within NUMMI with intensive support of executives, managers, and trainers sent from Japan. Every leader from Gary to the group leader on the shop-floor had one-on-one coaching every day. This is difficult and often impossible to replicate in most organisations.

That led my former student Mike Rother to start to experiment with different methods to develop lean leaders in organisations that lack a critical mass of executives steeped in the philosophy. This in turn gave rise to Toyota Kata and a structured methodology for teaching the kata, or routines, required to be a lean leader.

Mike's model for developing leaders starts with developing a scientific mindset. He also studied Toyota for decades and spent most of his time practicing within organisations as a change agent. He isolated the real goal of Toyota leadership development which is evident from the five core values of Toyota.

Toyota wants leaders who accept a clear and measureable challenge to make a step-function improvement in the level of performance using Kaizen to do so. They are obsessive about going and seeing for themselvesdirectly observing the process. They are developing themselves as a learner so they can nurture teams of people and show the utmost respect for people they are mentoring to learn and achieve greatness.

To do this they need to learn a scientific process for improvement which Mike calls the improvement kata:

He was able to isolate a simplified process of what Toyota mentors were teaching into four stages. The first four stages are planning in preparation to begin executing the improvements. The starting point is always a big challenge, generally one to three years out, which provides the direction for improvement efforts. Then we must understand in detail the current condition through direct observation. This does not lead to a complete plan for implementation because we are humble enough to realise that the world is complex and there is a limit to what we can know in advance of trying things. Acceptance of uncertainty is a characteristic of the scientific mindset. We only want to go as far as to define our first 'target condition', which is time dates. An example of this could be: "We will accomplish a reduction in half of the variation in how this process is carried out by three weeks from Tuesday."

Executing is a process of experimentation following the Deming cycle of: Plan, Do, Check, Act. We are running experiments like a scientist, except they are run on real processes, not in a laboratory. We iteratively learn from experiment after experiment until we reach our first target condition and then we assess what we have learned and define our next target condition and so on until we meet the challenge.

This is called a kata because Mike has defined a series of specific skills to develop and a way to advance them. We are developing routines or habits (kata) that with practice become second nature. This is how we change to a scientific mindset. When we have reached a level of maturity we can learn the coaching kata which is used to develop others using the improvement kata.

What I saw in Mike's work was an opportunity to operationalise the leadership development model I created with Gary Convis. It was not enough to say leaders should self-develop with a coach and here is how Toyota does it. We needed a concrete methodology for those who are not living in a mature culture like that of Toyota.

The Lean approach to Leadership Development

The leadership model and kata for developing people has led to a very different approach to lean deployment. We are no longer deploying tools or leading individual projects. We are focusing on developing people who have the capability to achieve greatness meeting challenge after challenge that at first glance seem impossible. This is a slower proposition at first and we are usually limited by the number of coaches. But it is nonetheless sustainable: the growth of progress increases exponentially as more coaches are developed and the impact multiplies exponentially.

This of course is all based on the premise that senior leaders at least eventually understand the philosophy and are willing to make a long-term commitment. The question is simple: Do you want short-term results that are impressive but not sustainable, or do you want to build a world-class enterprise? In Jim Collins' words: Do you want to be good or great?

This entry was posted in Enterprise Excellence on August 31, 2015 by Jeffrey Liker 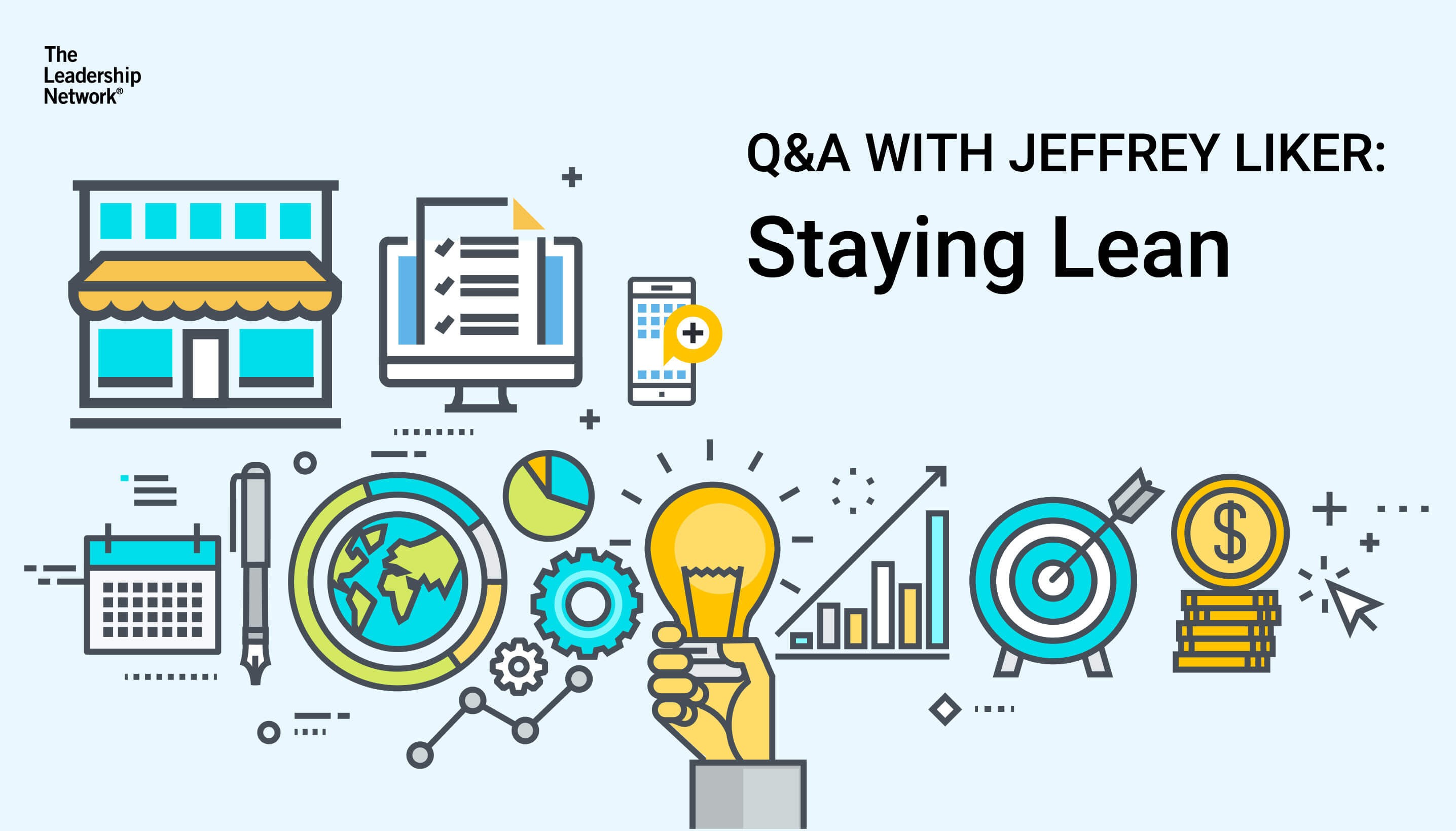 Enterprise Excellence
Q&A with Jeffrey Liker Part II: How to achieve Lea...
Q: What is the impact of the new ways of reducing hierarchy to be more... - Read More
Share this article 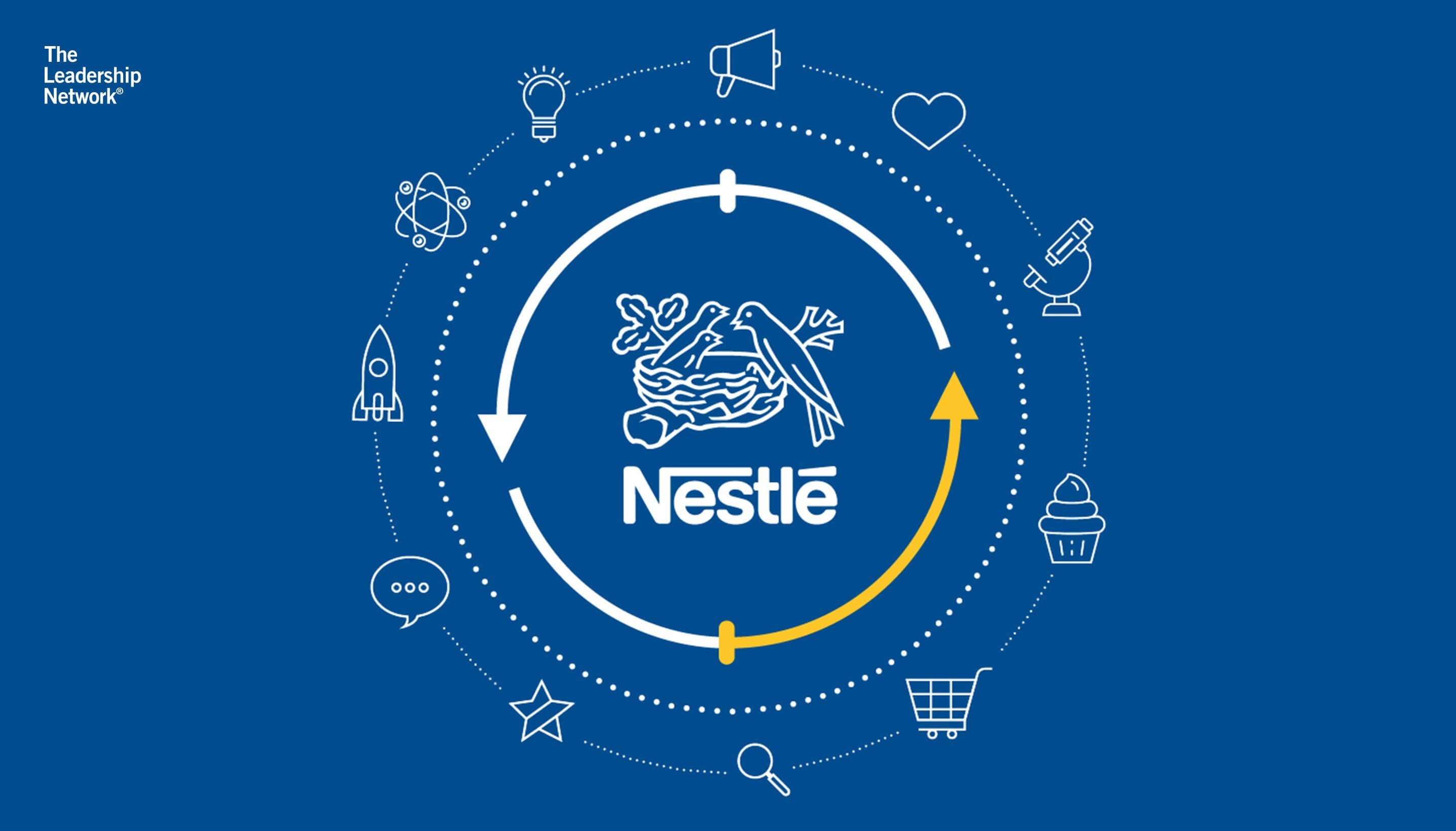 Enterprise Excellence
How Nestlé executives drive Innovation and Contin...
Nestlé’s Product Technology Centre (PTC) in York is at the forefront of Confectionery Research and... - Read More
Share this article 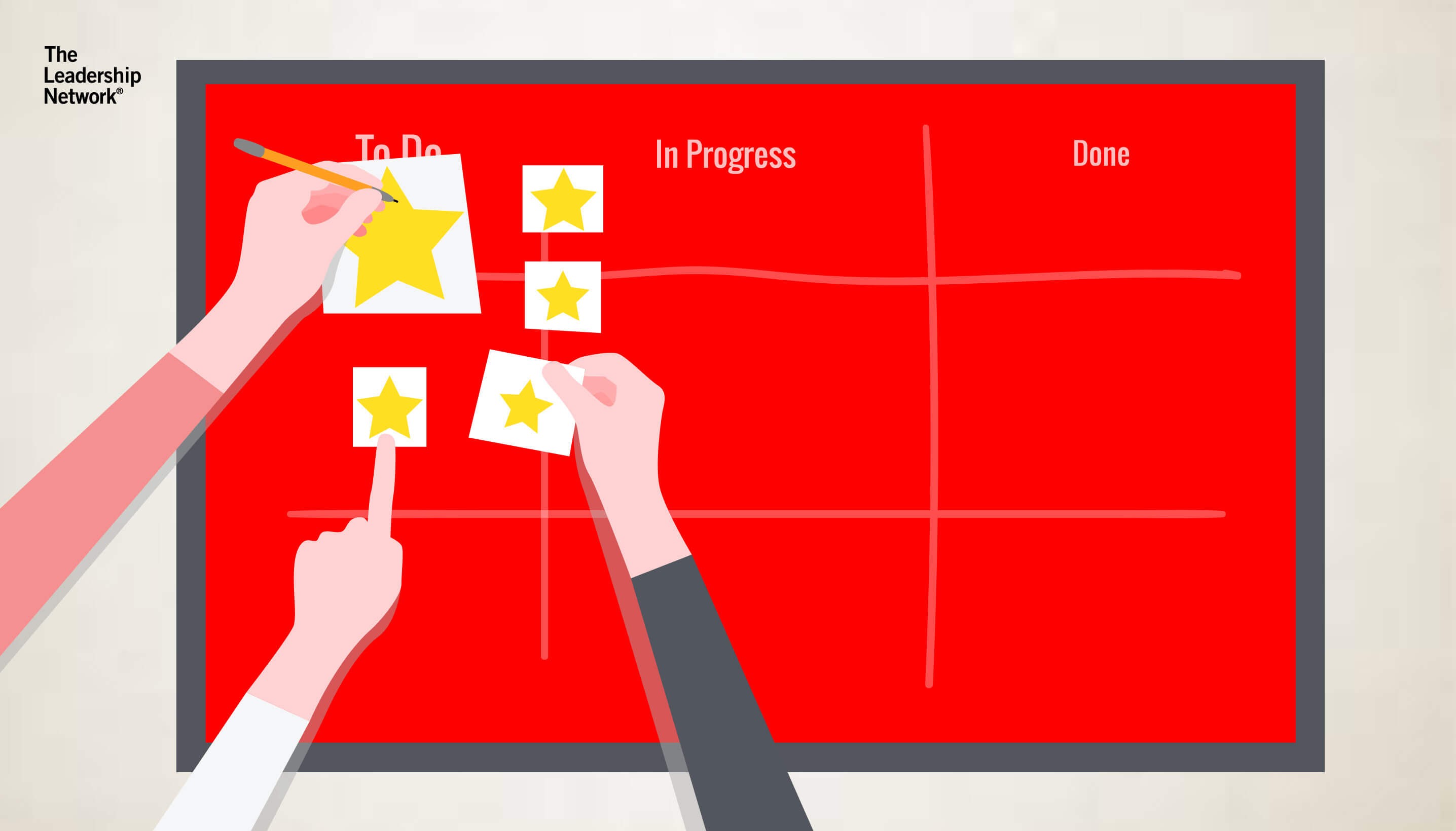 Enterprise Excellence
Agility, Chinese Style
Most Western companies have a functional/hierarchical structure. This was ideal for running a business efficiently in... - Read More
Share this article