The Rise and Role of the Chief Digital Officer 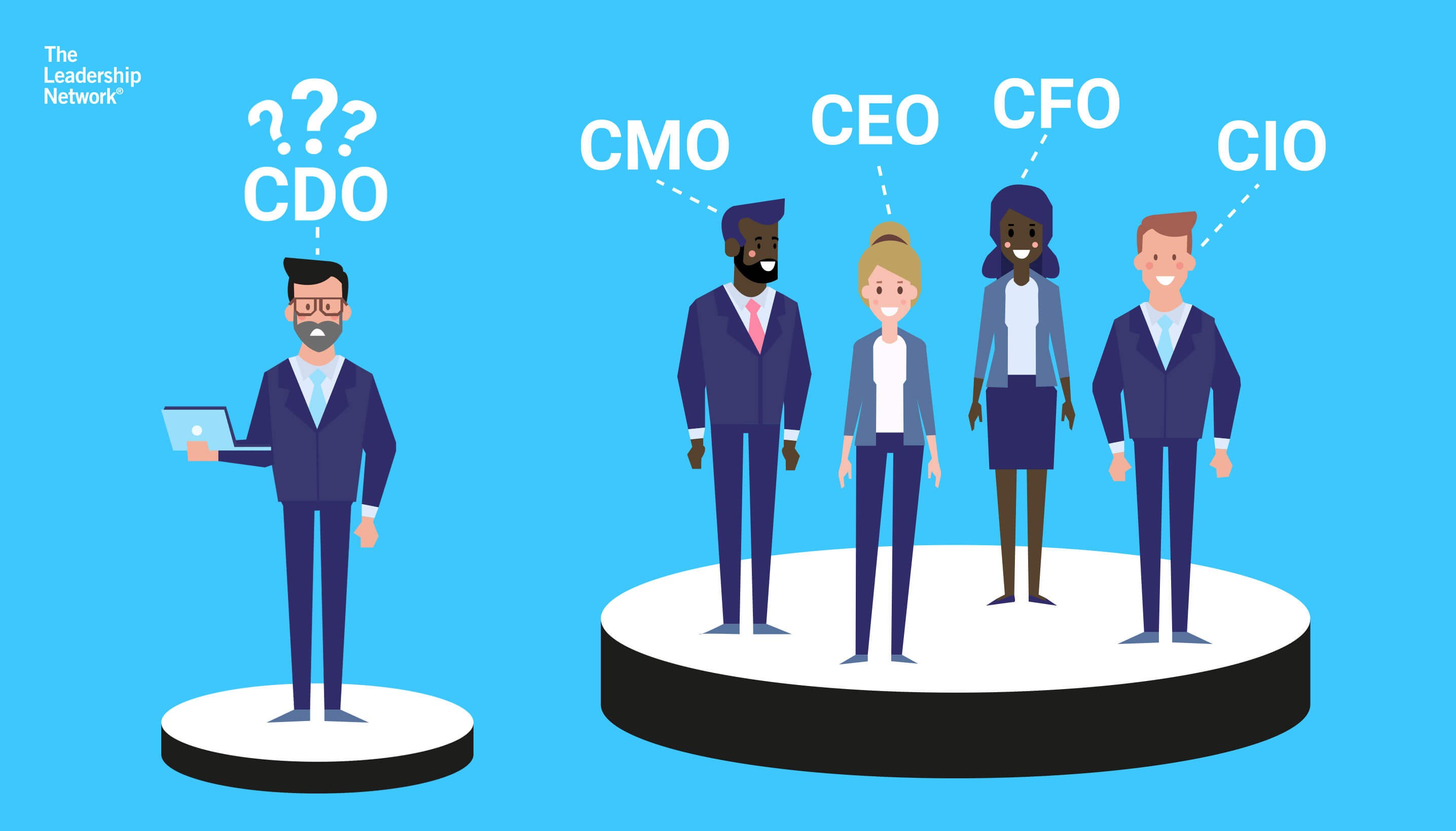 Opinions are still split on this issue. And, clearly, what works for one kind of company or industry might not be the best solution for another. Also, let’s not forget that some organizations were “born digital” – a term Gartner uses to describe “a generation of organizations founded after 1995, whose operating models and capabilities are based on exploiting internet-era information and digital technologies as a core competency” – while most firms came of age in the industrial era when more traditional business models were dominant.

The new tech champions might be said to have digital mastery embedded in their DNA, while many older companies are faced with the formidable challenge of rethinking and recalibrating their old-line business models to adapt to today’s very different digital economy. The former certainly don’t need a specific role in the organization dedicated to developing digital capabilities, because these technologies and capabilities are already fundamental to what they do. But for the latter group it might be argued that such a dedicated leadership role is imperative for their successful digital transformation and ultimately their survival. This would explain the exponential rise in the number of Chief Digital Officers appointed worldwide over the last decade.

The Digital Wave is here

It is estimated that back in 2008 there were probably no more than about a dozen CDOs worldwide. By 2010, that number had quadrupled, which still only took it to around 50 executives globally. Fast forward to 2015, and the number of CDOs was already well over 2,000. And since 2015, the digital wave has continued its exponential rise. In 2017, a study by Strategy& (PWC), found that approximately 19% of top global companies now have a CDO, 60% of whom were hired since 2015.

The rise in Europe, Middle East and Africa has been higher than in the rest of the world. Around 38% of leading businesses operating in European, Middle Eastern and African (EMEA) countries have opened a position for a Chief Digital Officer in their organization chart. Second on the list is North America, where roughly 23% of the top organizations have appointed a CDO.

When we move beyond regions to focus on specific countries, France leads the pack in Europe with around 62% of the companies surveyed having a CDO position, followed by Germany at 39%, and Great Britain at 35%. In Asia-Pacific, it’s Australia out in front with around 40% of the major businesses in the country having a CDO, followed by India at 20%.

Interestingly, but not surprisingly, it is consumer-facing industries such as financial services, communications, media and entertainment, consumer goods, and retail that lead the way in terms of appointing a Chief Digital Officer. Among the companies included in the survey, 35% of the insurance companies, 28% of the media/entertainment/communications companies, and 27% of both banking and consumer products/retail companies have appointed a CDO in some capacity. Next come food and pharmaceuticals companies, at 23% and 19% respectively, followed by the automotive industry at 15%. At the other end of the scale are classical industrial companies that serve B2B markets – industries like manufacturing, utilities, mining, or oil and gas, where the numbers drop to 13%, 12%, 5%, and 3% respectively.

What exactly is a Chief Digital Officer?

Essentially, it’s a C-level executive whose main role is to drive growth and strategic renewal by transforming an organization’s traditional analog businesses into digital ones, with a special focus on creating new value through the smart use of digital tools, platforms, technologies, services, and processes.

What’s the difference, then, between a Chief Digital Officer (CDO) and the more familiar role of Chief Information Officer (CIO)? Simply put, while the CIO has traditionally overseen a company’s IT infrastructure with a view to improving operational efficiency, the CDO is more concerned with implementing digital initiatives that enable strategic innovation and business transformation.

In broad terms, the traditional CIO could be said to be a manager of continuity while the CDO is a manager of change. Companies know they need to balance continuity of the current business on the one hand with rapid technological change and deep strategic renewal on the other, which is why the two separate leadership roles now exist. Then again, a large number of CIOs are trying to bridge the gap between the two, blurring both roles and making the position of CDO obsolete.

Time will tell if this is a better way of doing things. CIOs certainly need to transition into a more modern role in the organization, for one reason because a rising percentage of a company’s tech spending, which is now at a 10-year high across all industries, is now managed outside of the traditional IT function. But in my experience, few executives are ambidextrous enough to excel at both ends of the business spectrum. Inevitably, CIO’s tend to find themselves focused inward at the company’s existing business operations, while a CDO’s eyeballs are looking outward at issues like customer loyalty, brand experience, future strategy, and the creation of new business models and revenue streams. It’s very tough to manage these two opposite perspectives at the same time, and it also requires different mindsets, skills, and expertise.

This helps explains why, according to a recent survey of nearly 4,000 IT leaders across 84 countries (conducted by Harvey Nash and KPMG), “many CIOs admit they are struggling to introduce an effective digital strategy across their organizations.” By contrast, “half of organizations with a dedicated CDO and over 40% of organizations with an acting CDO reported having a clear enterprise digital strategy, compared with only 21% without a CDO.” More importantly, “these companies were more likely to be redesigning their company’s business processes to take advantage of digital technology than those with CIOs alone.” At companies that have chosen for the two distinct roles of CIO and CDO, both executives can work together to drive digital progress inside, outside, and across the organization. Based on the above survey, ComputerWeekly.com concludes that “The most successful companies employ both CIOs and Chief Digital Officers (CDOs) who work in tandem to take advantage of innovative technology.”

Who should the CDO report to?

The answer might seem obvious when we consider how important digital technology is for this position. Indeed, in many of the companies that have introduced this role over the last few years, the CDO reports to the CIO or CTO. But some have found that this structure doesn’t work well in practice. After struggling through a couple of years of tension caused by the addition of a CDO to their organization chart, one global engineering company decided to flip the reporting lines. Where the CDO initially reported to the CIO, today it’s the other way around. The CIO reports to the Chief Digital Officer, who in turns reports directly to the CEO. In fact, the company has since gone on to appoint digital officers in all of its business units, too, who report jointly to the business unit leaders and the CDO, and who are helping to embed digital innovation and transformation as a deep, companywide capability across the organization.

In a larger number of companies, and particularly in customer-facing industries, the CDO started out as an extension to the traditional marketing function, answering to the CMO, and responsible primarily for new digital activities such as social media, mobile apps, and the digital customer experience. Statistically, in fact, around two-thirds of today’s CDOs still reside within the company’s marketing function, while only about one-third report to the CIO or CTO. In my opinion, both of these constellations are sub-optimal, and I would tend to give the CDO a superior rank on the organization chart, at least on the same level as the CIO, CTO, or CMO, and, where appropriate, perhaps even one level higher. 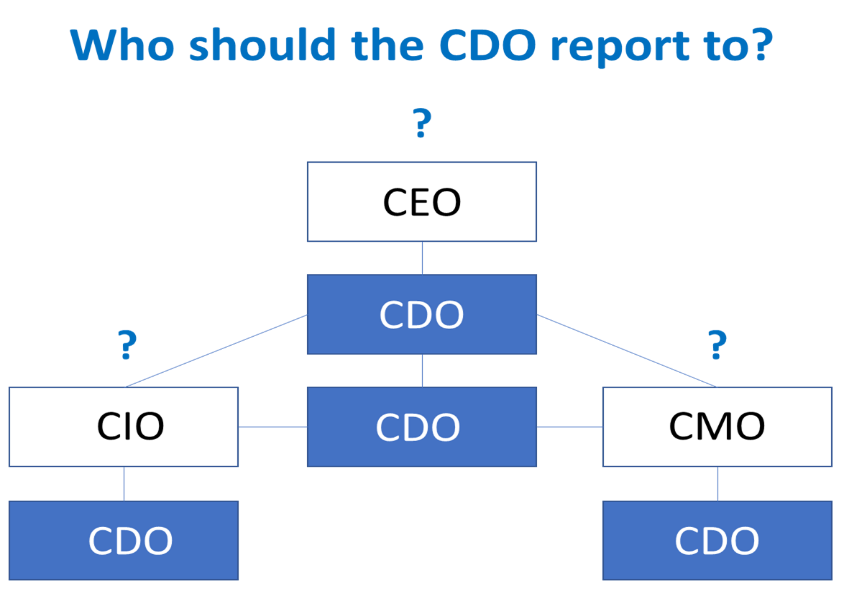 For years, there has been a flawed assumption in business that digital represents merely an adjunct to what a company has always done – something that, in effect, can be bolted onto the organization (i.e. by adding a digital marketing function, or a new role within IT) rather than baked into every aspect of the enterprise. Today, however, there’s a realization that digital innovation and transformation need to be at the very heart of corporate strategy and operations, perhaps even driving a radical reinvention of the business model itself. As McKinsey likes to put it, “Digital isn’t merely a thing—it’s a new way of doing things.” Thus, in many organizations, the role of the CDO is now evolving and expanding, thankfully taking on wider-reaching and far more strategic dimensions.

I also watched with the utmost curiosity when, in March 2016, Ford set up a dedicated digital subsidiary based in Palo Alto called Ford Smart Mobility, and appointed Jim Hackett, a man I knew personally from his many years as CEO of Steelcase, to serve as Chairman of the new unit. His mandate was to help Ford drive digital innovation and transformation as a means to enable 21st Century mobility, partly in response to the threat from tech giants like Uber Technologies Inc., Alphabet Inc. and others, as they continued to make inroads into the auto business. Just over one year later, Hackett was promoted to President and CEO of Ford Motor Company itself.

Companies like these, that are achieving a high level of digital awareness and maturity, understand the critical importance of the CDO’s role. But in organizations that are still playing digital catchup, CDO’s can sometimes end up stranded between the CIO and the CMO, who themselves may be playing a tug of war based on their own, perhaps conflicting visions, strategies, and priorities – even while their functions and roles should be intersecting. This can make the CDO’s job a political nightmare with little hope of success.

Responsibilities of a Chief Digital Officer

Now that we know what a Chief Digital Officer can bring to the picture, let’s take a look at the specific responsibilities that should be part of the CDO’s role description. Since the position itself is still relatively new and evolving fast, many organizations will need to move beyond a vague, ill-defined, or outdated job description. Here are just some of the key responsibilities many companies now consider for this role:

The Need for Digital Leadership

First and foremost, the CDO’s job is to be a digital leader, someone who is capable of successfully driving the transformation effort across the whole enterprise on a multi-year journey to digital excellence. That’s a lot to expect from any individual, but it also represents perhaps today’s most exciting and important corporate role, as companies face up to the new strategic challenges and business imperatives of the digital economy. Without creating this critical leadership role, appointing someone qualified to fill it, and supporting the chosen executive from the very top of the organization, how else can companies hope to make the transformational journey to a fully digital future?

If you are in a position of digital leadership yourself, why not join me in China at our next exclusive 3-day TLN masterclass in association with Alibaba Group, called “Leading Digital Transformation”. You’ll gain insights into exactly how Alibaba is pushing the frontiers of digital technology across their entire ecosystem, and you’ll learn how to apply these lessons in practical ways inside your own organization to drive digital innovation and transformation. Don’t miss this unique opportunity to network with other executives like yourself who are pushing the digital agenda forward inside some of the world’s top companies. Together, you’ll discover the secrets of success that can help you hone your skills as a digital leader and gain better traction in your efforts to make digital transformation happen across your company. 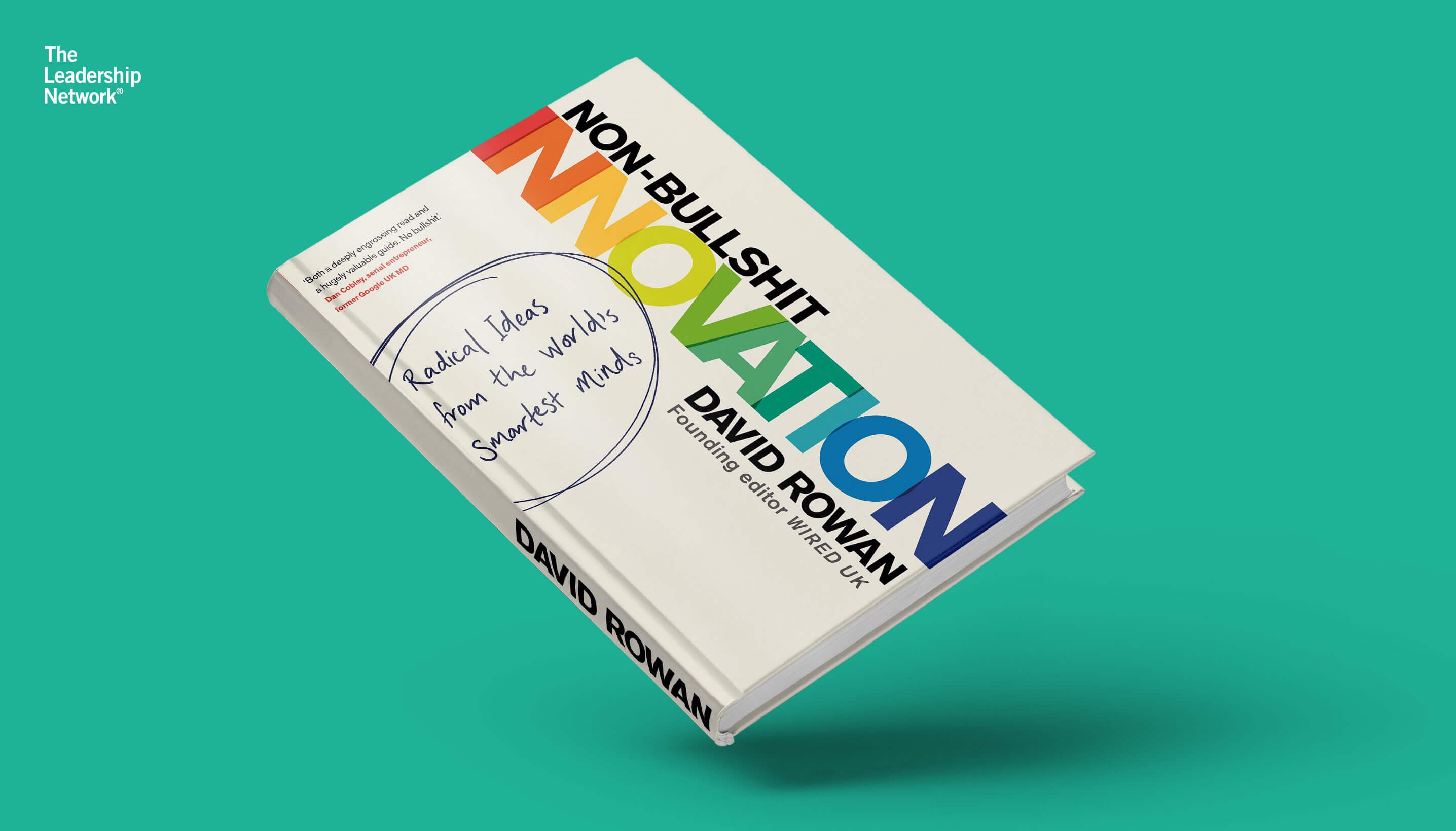 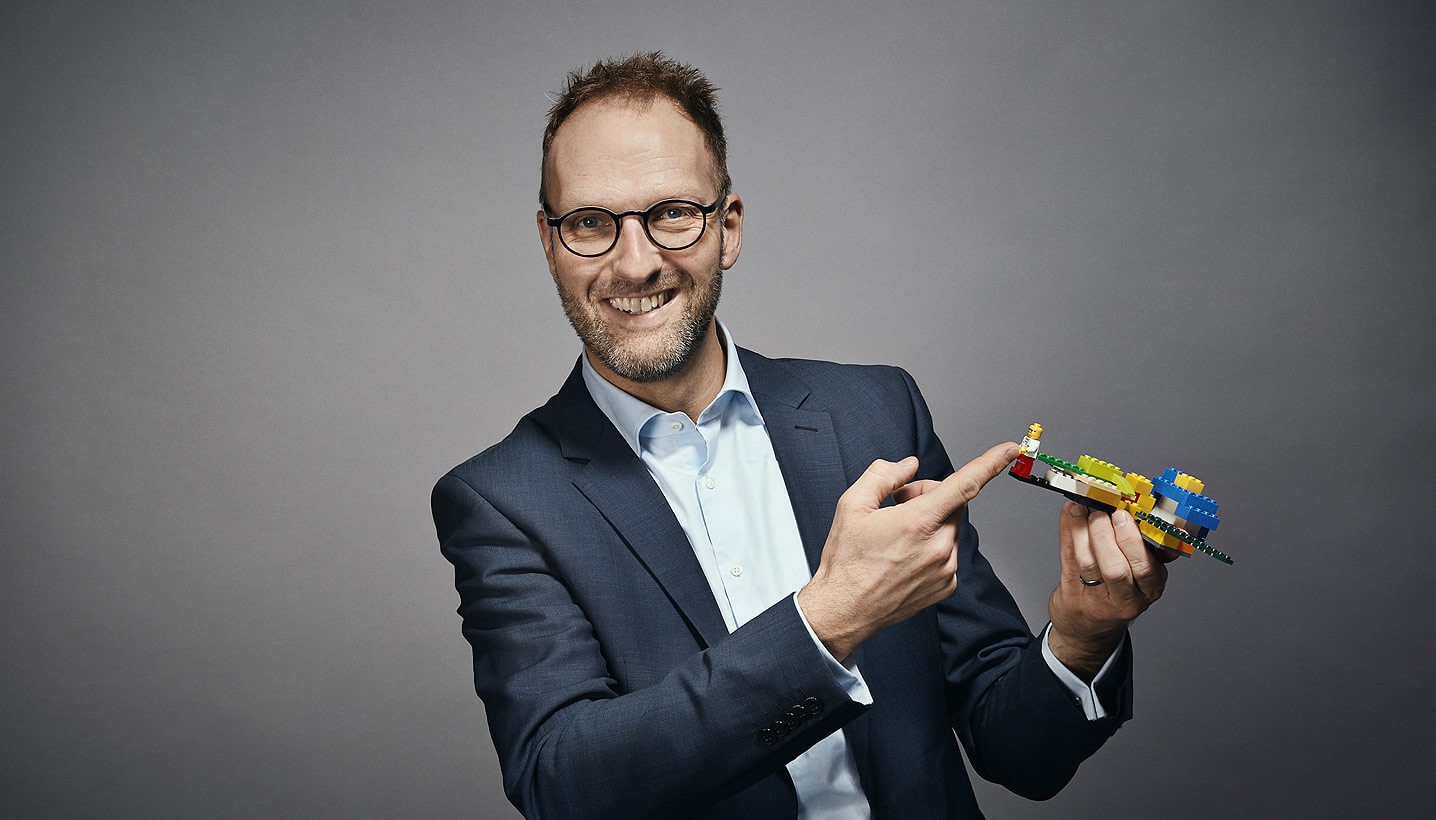 Innovation Excellence
5 Sustainable Innovation Practices that Saved LEGO
Every second, seven boxes of LEGO are sold. For every person in the world, there... - Read More
Share this article 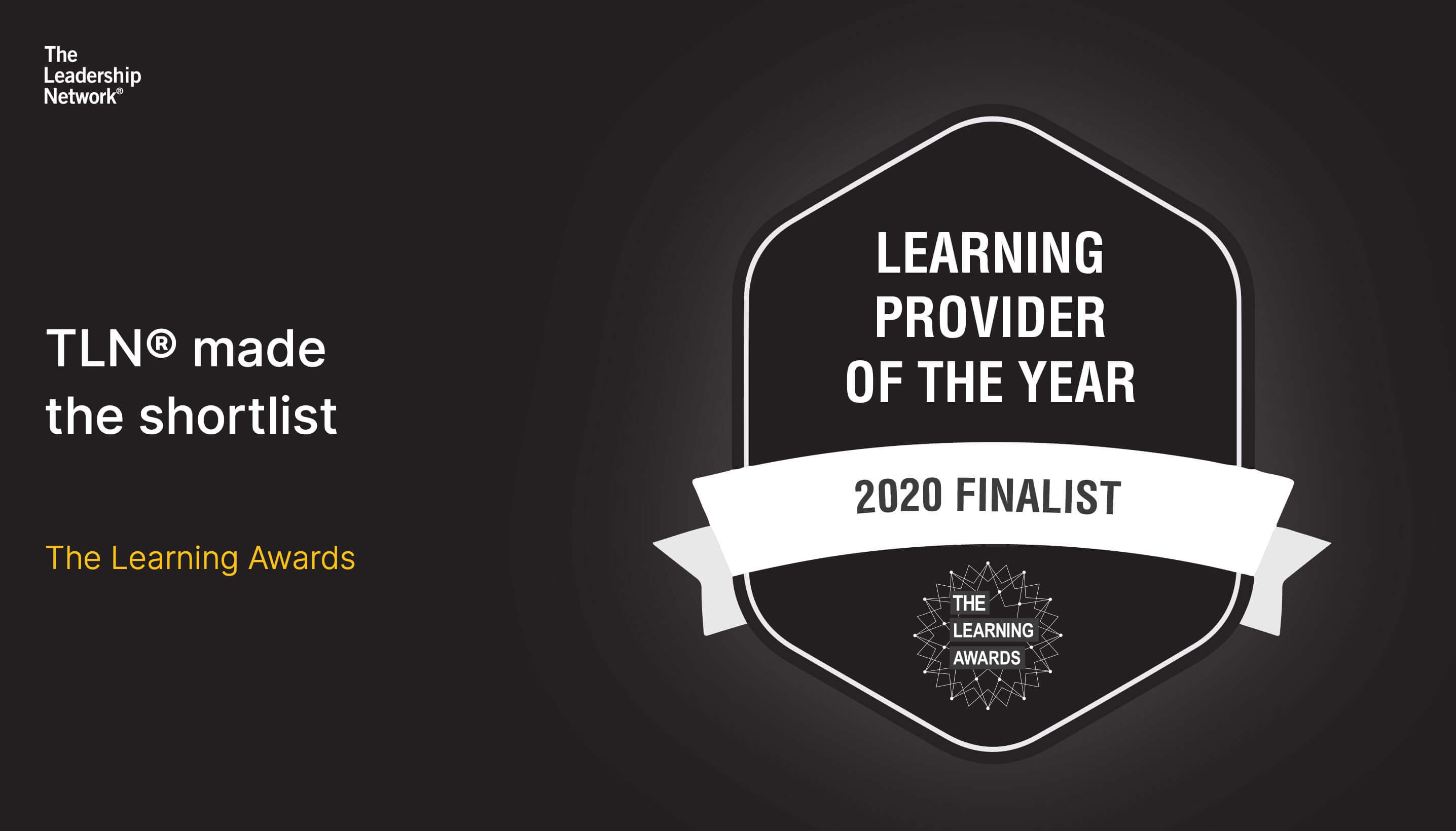